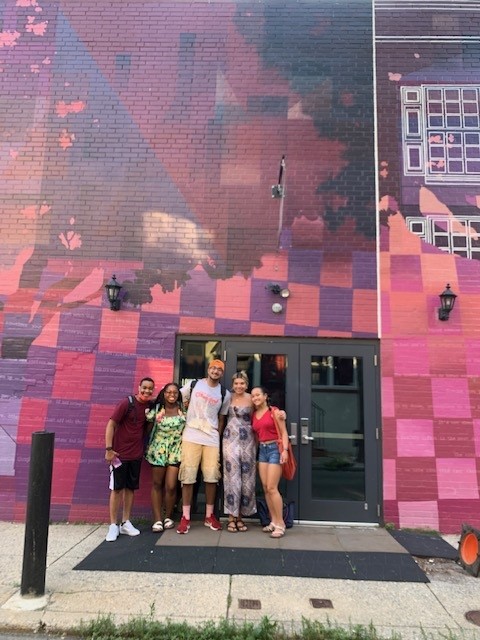 After class on Wednesday Intern Philly’s cohort took a walking tour of The Mural Mile, the Mural Arts program group of some of Philadelphia’s over 4,000 public murals arranged along a walking route through the heart of Center City.  Mural Arts Philadelphia is the largest public art program in the United States.  Here’s what we saw:
The Stage

The arts scene in Philadelphia is filled with talent and grit, and theater is no exception. The historic Drake building in Center City is home to wildly original performances, many of them written by local, living playwrights. Now the Drake is also home to a new mural from artist Felix St. Fort, inspired by the space’s long history of creative vitality and cross-disciplinary work. The Stage turns an exterior wall into an abstract set for a play, complete with 42 lines of text from plays written by playwrights with connections to the Drake.

Part of his Seasons series of projects, Artist and Arcadia Faculty, David Guinn, designed the mural to connect the trees on either side of the wall, on Pine Street and in the backyard of the house, as if there were a park in front of the wall rather than a parking lot.  David wanted to paint the trees crisply and in detail but at the same time have a soft and organic feel.  His idea was to make soft forms out of hard-edged blocks of color. His hope was that they would allow the mural to be seen simultaneously as a flat abstraction of color and as having depth and space.

A neighborhood civic association requested a mural to brighten up the exterior of Dirty Frank’s, a well- known dive bar’s exterior. The artist, David McShane, felt his strength was in graphic style portraiture, and so proposed a collage of famous people named Frank or who had the word Frank in the name. The artist chose those that had a connection to the city, or to him.  Some of the the Franks depicted are Benjamin Franklin, Frankie Avalon, the floral architecture design used by Frank Furness, Aretha Franklin, a frankfurter, Frankenstein’s monster, Franklin Delano Roosevelt, Frank Zappa, Pope Francis, St. Francis of Assisi (for whom the artist used his twin brother, Frank, as a model) and others. There were intentionally no words painted on the mural to identify the Franks -- which makes it more interesting for the viewers to guess how they are connected -- and no signage to identify the bar as Dirty Franks to preserve the quirky anonymity that patrons love. 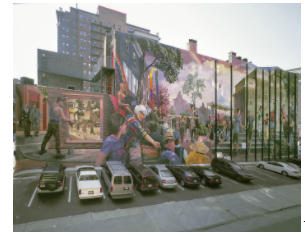 This mural was designed and created by artist, Ann Northrup, and her team of 15 assistants. The artwork occupies the entire west wall of the William Way Center, the LGBTQ community center in Philadelphia. The mural depicts a gay pride festival in the midst of nearby landmarks. The left side of the mural is a man pasting up a poster depicting the gay civil rights march held in 1966, pre-Stonewall, giving a historic and political context to the piece. Ann says that one of the wonderful things about working on the mural was the people who came by daily to express their appreciation and support. The mural provides the opportunity to state publicly feelings about the good in people -- underscoring the importance that people are accepted, and their love is accepted and celebrated. 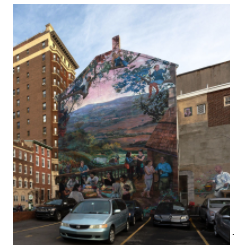 The mural is set in an idealized landscape – a combination of rural parts of Philadelphia County and Perugia, Italy. The people are outdoors on a terrace eating, drinking, arguing, flirting, climbing trees, and sleeping. The mural is on the side of Vetri Cucina, owned by James-Beard-award-winning Chef Marc Vetri. The artist’s idyllic vision matched Vetri’s values as a chef and restaurateur saying that “Vetri’s philosophy is that a great food experience is all about the feelings and environment you are in at the time, so we were perfectly in sync.” 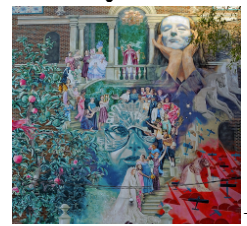 This mural by artists Cesar Viveros and Larissa Preston depicts the progress made in women's rights. Although barely visible in this photo, the mural contains a watermark that reads, "Equal Jobs and Educational Opportunities". The masks worn by some of the women represent the social pressures and problems women have faced (and continue to face) in their progress towards equality. The mural decorates the wall of the New Century Guild building. New Century Guild was founded in 1882 as one of the earliest, largest, and most successful organizations that dealt with women's problems and rights as they entered the labor force. 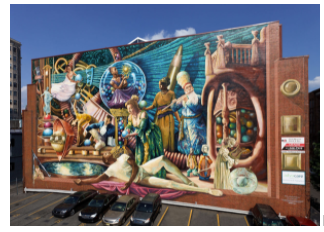 Philadelphia Muses is one of the most iconic projects Mural Arts has. Intended as a contemporary interpretation of the classical muses, Meg Saligman created an arts landscape filled with figures and elements symbolizing today’s art and creativity. In the center of the composition is an arts machine spinning out spheres, symbols of the perfect art form.  Each of the nine muses in the composition is associated with a sphere, and there are circular references throughout the composition, such as the compass. Through portraits of local performing artists and references to works of art by local artists, Saligman honored the following forms of creative expression and the nine muses. The entire mural was created by the artist in her studio, using large squares of a polyester fabric called non-woven media (or parachute cloth), which were then adhered to the wall -- much like a giant decoupage. 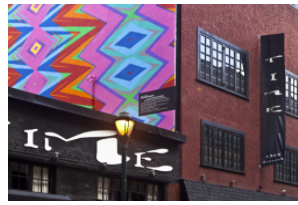 Students worked with AVAF, a collaborative of visual performance artists who have been featured in Art Forum, Vogue, W Magazine, and who exhibit internationally. One of avaf’s core members, Christophe Hamaide-Pierson, joined students from Hawthorne Recreation Center and Mastery Charter School's  Campus to create a work for a wall at 1315 Sansom Street.  Together, they created a dynamic, colorful, patterned mural in the classroom that was later installed on the wall site. 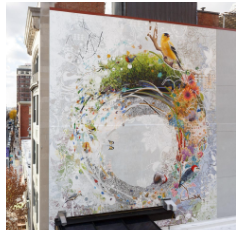 This work grew out of the Community Wellness Project, which raises awareness about mental and emotional health, and extends into the restaurant below. Artist James Burns’ Sanctuary was designed to inspire conversation about what constitutes community health. Based on the Enso circle, a form of active meditation that involves clarity of mind and movement of the hand, Burns’ design incorporates a number of natural elements, as well as striking imagery created by participants in workshops at Broad Street Ministry and around the city. 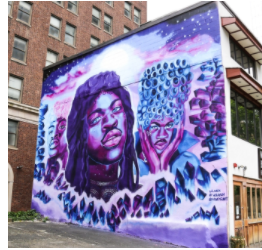 For Pride Month, Lil Nas X, the out LGBTQ icon got an extra-large visual tribute in the form of a three-story-tall mural in the “Gayborhood” area of downtown Philadelphia.  Philly artist Ash Ryan based the mural on three of Lil Nas X’s characters in the “Montero” video. She added the clouds and crystals because she wanted Lil Nas X to look “heavenly, divine and spiritual,” as she puts it. It took Ryan just over a week - and 138 cans of spray paint — to pay tribute to Lil Nas X, who shared on social media that the song and the recognition offered in this mural was an important moment for him and his journey to self-acceptance. 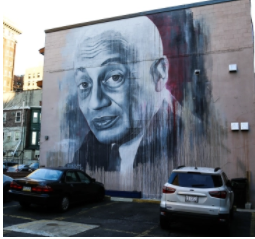 On the other side of the building that holds the Lil Nas X painting is a mural of the “Father of the Harlem Renaissance," Alain Locke. London-based artist Ben Slow said that “Alain LeRoy Locke, a leading black intellectual during the early twentieth century and an important founder of the Harlem Renaissance, was born in Philadelphia and has been widely regarded as the originator of the New Negro Movement and the Harlem Renaissance. His main contribution to both movements was the promotion and emphasis on values, diversity, and race relations.” 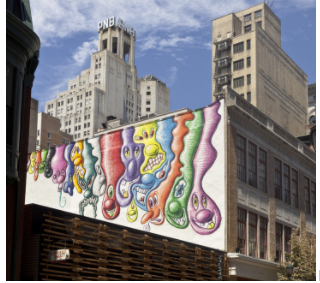 During his residency with the Mural Arts students, Kenny Scharf, a world-renowned American painter living in Brooklyn, shared his graffiti roots with students, teaching them the art of working with acrylic spray paint. Scharf’s work first came to prominence in the 80s interdisciplinary art scene in New York’s East Village. He is known for paintings that employ surrealistic imagery inspired by television, cartoons, and the club culture he experienced during his youth. 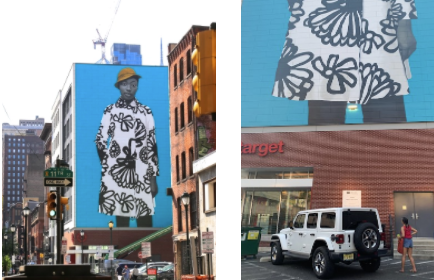 Amy Sherald, portrait artist for Michelle Obama, created this oversized portrait of Philadelphia public school student Najee S. to challenge ideas of identity and the public gaze. Sherald’s mural challenges those ideas, asking the questions: “Who is allowed to be comfortable in public spaces? Who is represented in art? How can one woman’s portrait begin to shift that experience for others?”  The project began with a field trip to Sherald’s studio by some of Mural Arts’ art education participants. The young people spent a day with Sherald, learning about her unique artistic practice, exploring costumes, and taking photographs together that would form the inspiration for the mural.  Sherald has said “I paint everyday people and want the images to be recognized as universal. For black viewers, it’s a place of rest and a place to receive love, to walk into a space and see an image of a person that looks like you looking back at you. People take for granted that not seeing yourself can lead you to not loving yourself.” This mural is 6 stories tall and was hand painted.

Eric Okdeh’s mural encapsulates both the history and future of medical breakthroughs, The Promise of Biotechnology is a window into the next generation of scientific advancements. This mural seems to take the form of a collage, layering scientific study, human development, the human genome, an aloe plant, and micro-organisms which can both cause and prevent disease. Set atop the aloe plant is the golden ratio, the embodiment of science, art, math, and beauty. The mural was painted over a three-month period by dozens of students from local schools and inmates at the State Correctional Institution in Montgomery County, and at community paint days. 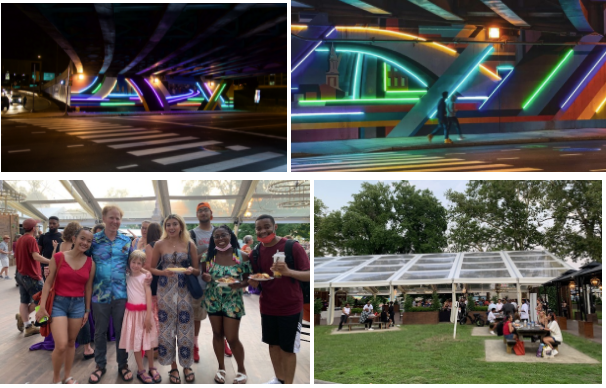 In the midst of the coronavirus pandemic, it has been easy to lose track of what's new and what's sadly gone in Philadelphia during the course of 2020 and 2021. One thing you can't miss if you're headed to the Schuylkill Expressway from 6th Street is a long-awaited mural from artists David Guinn and Drew Billiau, lighting up the underpass of I-676 in bold, vibrant colors. The 8,500-square-foot project completion date was pushed back by the pandemic. “The site presented an amazing opportunity to me to represent the overlap of tremendous history with the energetic forward-looking Philadelphia of today,” Guinn said. “Neon-like LED lights integrated into the mural will transform the underpass into a beacon attracting visitors from all directions and boldly proclaim the city’s industriousness and creativity, both past and present.” The opening had live music, meet and greet with the artists, dinner and a good time for all!