Have you heard talk about Mago Pop? Is this name familiar to you? I suppose yes because he is becoming very famous around the world. He is a young magician born in Barcelona that is surprising people with his tricks here and there wherever he goes. 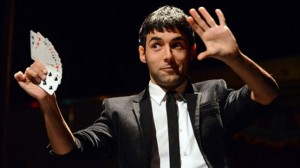 Antonio Díaz is his authentic name, and he started at just only 17 years old in show business. He is internationally known for his teleportations in person, and he is revolutionizing the magician’s world, leaving a lot of open mouths in countless stages.

In 2013, he jumped to the television with “El Mago Pop”, it was a production in which he became the first Hispanic illusionist to have his own television program, and it was broadcasted in different South American countries.

Now, he is doing a show in the city, in Teatre Victoria to be exact. So I recommend you buy your tickets as soon as possible before they become sold out because this man could surprise you more than you can believe.

We can read already the reviews about his show and they are fantastic, some people say, “He does not belong to this world, he is amazing!”. It is time to go to see him at the stage and enjoy his amazing performance. Here, I leave you a link that goes directly to his website to can buy tickets.