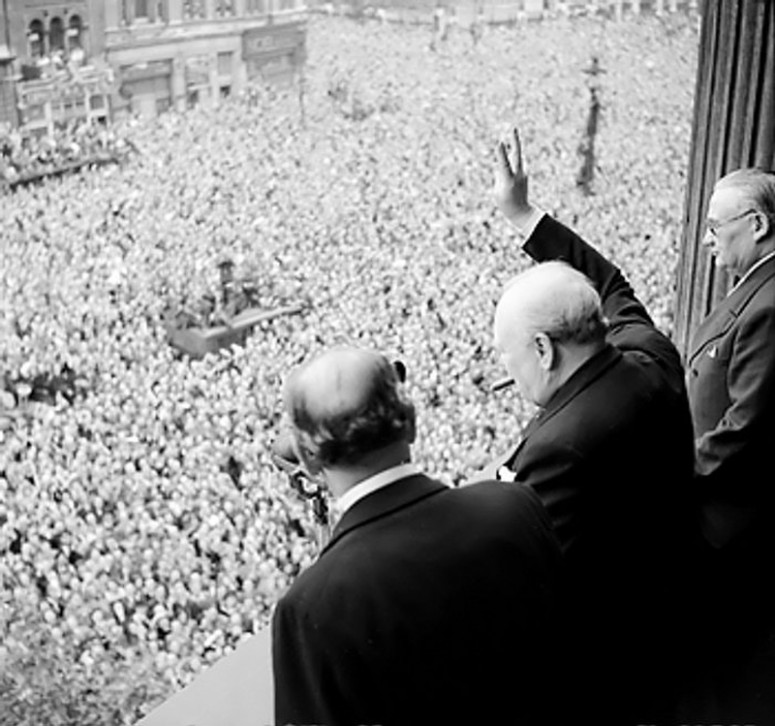 Seventy-five years ago this Friday the Second World War ended in Europe. Although the Empire of Japan fought on until August, and only surrendered after the bombing of Hiroshima and Nagasaki, for many Britons 8th May 1945 marked the real end of the war. Between 70-85 million people had died during the war, among this total were 383,700 British and colonial troops and a further 67,200 civilian casualties. Britain had of course fought wars before, a lot of them in fact, but V.E. Day seemed different. Peace after the First World War had proved fleeting, with fighting continuing between state and non-state actors for several years. Many of the grievances that had led to war in 1914 had never been fully resolved, while the rise of both communism and fascism created new issues that made lasting peace unlikely. For this reason some historians view the period 1914 to 1945 as a continuous European civil war, rather than two distinct conflicts separated by the interwar years.

Yet the end of the Second World War seemed to herald the beginning of a new era. Germany, and her European allies, had been defeated comprehensively, and there could be no recourse to the ‘Stabbed in the Back’ myth that developed after the First World War. The United States realised that the isolationism of the interwar years had only aided the rise of totalitarianism, and was committed to the new internationalist spirit. The Marshall Plan distributed $12 billion to European countries for the purposes of reconstruction, an offer that was extended to former allies and enemies alike. The cooperation, ultimately temporary, between the capitalist west and communist east also added to the sense of optimism. Whereas the League of Nations had failed to create a constructive forum for international cooperation, the Declaration of the United Nations in 1942 gave hope for a better world.  When it was announced that Germany had unconditionally surrendered then it seemed that Europe would finally be at peace after decades of uncertainty.

Across Britain people came together to celebrate, and for a day at least the immense hardships of the war were forgotten. One Glaswegian interviewed by the BBC recalled many years later the scenes he saw that day:

The tram cars in Hope Street were filled with servicemen of all nationalities - American, Canadian, Australian, European; all of them commandeering the trams and singing and dancing up and down the length of Hope Street, singing all kinds of songs I had never heard before.

At the bottom of the street the dance was the 'eightsome reel' - this of course took precedence over all the other carousing. This was Scotland's national dance, and everyone could join in.

In Edinburgh The Scotsman reported, perhaps unsurprisingly, that the wet weather had not ‘appreciably affected the spirits’ of the crowds who gathered. The celebrations in the city took on an international tone with the Union Jack flying alongside the stars and stripes, the hammer and sickle of the U.S.S.R., and there were even reports of the odd saltire. Despite celebrations lasting well into the night, the crowds remained good humoured, with reports of sailors and policemen dancing together. There had been some concern over whether pubs should be allowed to stay open for later, but the matter was resolved when most premises shut early due to running out of alcohol. The scenes of revelry that took place in Britain should, however, be put in context. Britain was fortunate among the European nations, and across the continent V.E. Day provided only a temporary respite from the suffering caused by the war.

Indeed many Europeans had mixed feelings about the end of the war. The U.S.S.R. had occupied large parts of Central and Eastern Europe under the guise of liberation. Stalin would wryly remark years later ‘That we toyed with the idea of reaching Paris.’ For these nations the end of the war had merely replaced one form of tyranny with another, and true independence would not come until the revolutions of 1989. Even for countries like France, who were fortunate enough to be liberated while maintaining their sovereignty, difficult questions had to be asked over collaboration with the Nazis. French women accused of having affairs with German soldiers had their heads shaved and were daubed with swastikas in ugly acts of public humiliation. For those fortunate enough to survive the brutality of the Nazi camp system, their situation improved only slightly. The American civil rights activist Earl G. Harrison reported to President Truman that:

three months after V-E Day and even longer after the liberation of individual groups, many Jewish displaced persons and other non-repatriables are living under guard behind barbed-wire fences, in camps of several descriptions, including some of the most notorious of the concentration camps, amidst crowded, frequently unsanitary and generally grim conditions.

It was estimated by one US Army chaplain, a rabbi no less, that even after the liberation there were as many as 23,000 deaths at Bergen Belsen. It is important to remember that the 8th May 1945 marked the end of fighting, but the repercussions of the war lived on for decades.

This Friday takes on a special significance for many in Britain due to parallels between the Covid-19 pandemic and the war. Much has been made of the ‘British fighting spirit’ and sense of community that has been rekindled by the recent crisis, something that both the Prime Minister and the Queen alluded to in recent speeches. Some historians argue that the Second World War also created a political consensus between the Conservative and Labour parties, which allowed the development of the NHS, an asset whose immense value has become all the more apparent of late. Yet we should not rely too heavily on this sense of British exceptionalism. Much like the war itself, the recent crisis can only be overcome through international cooperation and compassion for our fellow humans.