The 700th Anniversary of the Declaration of Arbroath 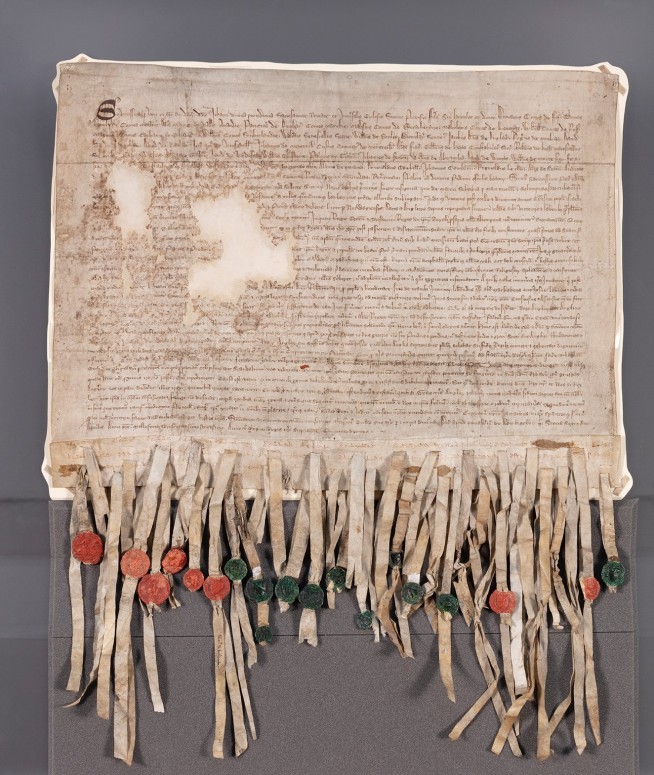 This Monday marks 700 hundred years since the writing of the Declaration of Arbroath, a document that is widely believed to be the most important in Scotland’s history. Debated by historians, and quoted by politicians, the ‘Declaration’ was actually a letter from the Scottish nobility to Pope John XXII asking him to recognise Scotland’s right to remain an independent kingdom free from English subjugation. Yet the Declaration is far more than a mere assertion of Scottish independence, with its meaning and significance changing significantly throughout the centuries.

The death of Alexander III without an heir in 1286, had created a power vacuum in Scotland, which allowed Edward I of England to dominate Scotland’s weak king John Balliol. Matters came to a head when Balliol allied himself with France and refused to give homage to Edward, resulting in the two nations going to war. After a short English invasion Balliol was captured, and it was left to William Wallace to lead the Scottish resistance. Despite routing the English army at Stirling Bridge in 1297, the Scots lost at Falkirk the following year, and Wallace was captured and executed in 1305. Robert the Bruce, who had previously fought on the English side, seized the opportunity to install himself as king of Scotland. The Bruce family had a somewhat tenuous claim to the throne via a maternal line, yet Bruce’s ability to oppose the English appealed more to the Scot’s nobility than his bloodline. Although Bruce defeated the English at Bannockburn in 1314, Edward II still refused to renounce his father’s claim over Scotland. With an amicable truce looking increasingly unlikely, it was hoped that the papacy could resolve the conflict. Bruce had earlier refused to attend a papal court in 1319, and was already under excommunication for the murder of his rival, John Comyn, in 1306. Relations between the papacy and the Scots were at a low point at time of writing the Declaration, and it was under these circumstances that the Scots had to present their case to Pope John XXII.

‘As long as a hundred of us remain alive’

One of the main aims of the letter was to reassert Scotland’s sovereignty as an independent Kingdom. There was the very real prospect of Scotland being absorbed into England, as Wales had during the previous century, so it was necessary to create a consistent narrative of Scottish nationhood. The letter begins with an account of the mythical origins of the Scots dating back to antiquity:

From the chronicles and books of the ancients we find that among other famous nations our own, the Scots, has been graced with widespread renown. It journeyed from Greater Scythia by way of the Tyrrhenian Sea and the Pillars of Hercules, and dwelt for a long course of time in Spain among the most savage peoples, but nowhere could it be subdued by any people.

Although the Scot’s origin myth was spurious, this was a response to the equally nonsensical English claim that their supposed founder, Brutus of Troy, had been given dominion over all of Britain. The Declaration then proceeds to blame the English for the acrimonious relations between the two nations, while asserting that the Scots will defend themselves against any further aggression. Robert the Bruce, ‘our most tireless prince’, is named as the rightful king and protector of the Scots. It is here that the Declaration makes the oft-quoted remark that:

as long as a hundred of us remain alive, never will we on any conditions be subjected to the lordship of the English. It is in truth not for glory, nor riches, nor honours that we are fighting, but for freedom alone, which no honest man gives up but with life itself.

This line would later inspire Scottish nationalists in their own fight for independence, but should the Declaration be interpreted in this way?

‘Then rouse the Christian princes who for false reasons pretend’

Despite the reverence the document is held in today, its significance and meaning are a matter of debate. The immediate impact of the Declaration is dubious, as England did not recognise Bruce as king of Scots until 1328. Edward III renounced the treaty in 1332, Bruce having died three years earlier, and the two nations would remain at war until 1357. Some historians argue that the Declaration had more to do with securing Bruce’s crown, than with protecting Scotland’s independence. Only a few months after the Declaration was written several of the signatories were involved in an attempted coup to replace Bruce with William de Soules. The Declaration then might be seen as an attempt to corral the Scottish nobility into declaring for Bruce.

How then should we view the Declaration of Arbroath today in light of historical circumstances and the present political situation? The Declaration can no more act as an argument for independence, than the 1707 Act of Union be used to justify remaining a part of Great Britain. These documents were products of their time, and spoke to the political, economic, social circumstances of their day. In an earlier blog on the Battle of Bannockburn, I made the argument that the Declaration asserts the right of subjects to oppose monarchical power. The signatories made the statement that if Bruce would not protect Scottish sovereignty:

We should exert ourselves at once to drive him out as our enemy and a subverter of his own right and ours, and make some other man who was well able to defend us our King.

It is interesting that the first English translation of the Declaration appeared during the Glorius Revolution, at a time when Scots and English were working together to depose James II and IV for misrule. It is easy to see why some have claimed that the Founding Fathers were influenced by these words when it came to composing the Declaration of Independence. The tyranny of George III, could easily be compared with that of Edward I, even if the Hanoverians were more closely related to Bruce than Edward. Regardless of its original meaning the Declaration clearly resonates with many Scots, both at home and abroad, even today.