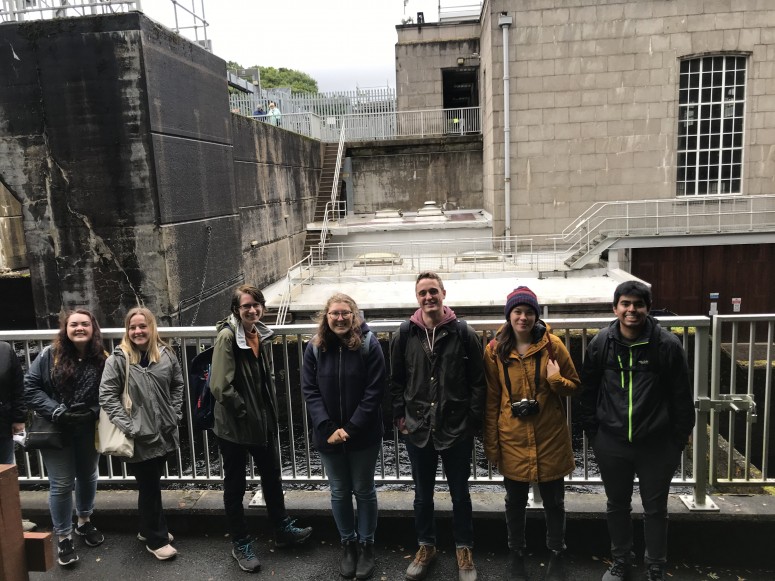 Arcadia Scotland ran its first Highland's Day trip in a while. Jason Wade (University of Colorado - Boulder), a student studying in Scotland for the semester at the University of Edinburgh, kindly offered to write a blog reflecting about one of the stops on the event - the Pitlochry Dam and Hydro Power Station. THANK YOU JASON!!!

"On the Lower Snake River in the Inland Northwest Corner of the United States, there exists a series of four dams that have threatened or endangered every species of Salmon that travels up the river and endangered the Orca population off the coast of Washington State and British Columbia.  They provide a negligible amount of power to the region, do not provide any form of flood control, and a court-mandated environmental impact statement found that the only way to give area salmon a chance at recovery is to remove the four dams entirely.  In light of this, the US Federal Government chose to keep the dams in place, and add more fish ladders to the dams, despite the ones in place already not doing enough.

Salmon populations have been decreasing in population across the globe, but their situation is different in Scotland than in Washington State.  Although experts have not found the specific cause(s) of the decline of Scottish Salmon populations, dams are not the primary concern– likely due to the basic regard for fish populations that Scotland has whilst building infrastructure.

In Pitlochry, 4,000 salmon on average pass through the Pitlochry Dam each season.  When the dam was initially being built, the government wanted to make sure that the dam would not decimate Salmon populations on the River Tummel (and Tay) and in turn destroy the fishing and tourism industry around it.  Alongside building the dam, engineers also added a fish ladder, designed specifically for the dam.  The ladder consists of multiple pools for the salmon to swim up, designed to allow salmon to bypass the dam.  Salmon are able to jump between the pools of water, and the ladder maintains a current so the fish know which way to go.

Even before we knew the full extent of damage humans are capable of causing to climate and ecosystems, Scotland was wary of their environmental impacts.  At the height of industry in post WWII society, there were already Scots advocating for the environment, and making sure to protect their natural environment.

With the Snake River Dams on the other hand, The Bonneville Power Administration that owns them threatened to add Natural Gas plants if the dams are removed, even though the region often has an energy surplus.  The Governor of Washington state wants the Snake River dams removed, and even some local conservative politicians have conceded and suggested just letting the dams get taken out (so long as they get money too, of course).

The difference between these dams, and between the United States and Scotland as a whole, is that the United States is so obsessed with industry and profit, so controlled by fossil fuel lobbyists and corporations, that it gives no thought to the benefits of the environment.  Politicians on all sides have built oil pipelines through indigenous land, and corporations have been trying to mine for fossil fuels and metals in the Arctic National Wildlife Refuge for decades.  Scotland on the other hand, confronts these issues on a much wider scale.  Just walking around Edinburgh enough, one will find multiple groups protesting against the climate inaction from world governments.  Flyers and signs stating “System Change, Not Climate Change” and providing details to a climate protest in Glasgow against the UN can be found on pamphlets throughout the city.  The thing about Scotland it seems, is that the people care.  The people want the best for their land– and even though Scotland still contributes to climate change, there are small victories to look to.  The salmon may be struggling here, but the fish ladders in place and the regard for the environment in Scotland is giving them much more of a chance than the Pacific Coast Salmon have in America."