Scotland, America, and the Beautiful Game 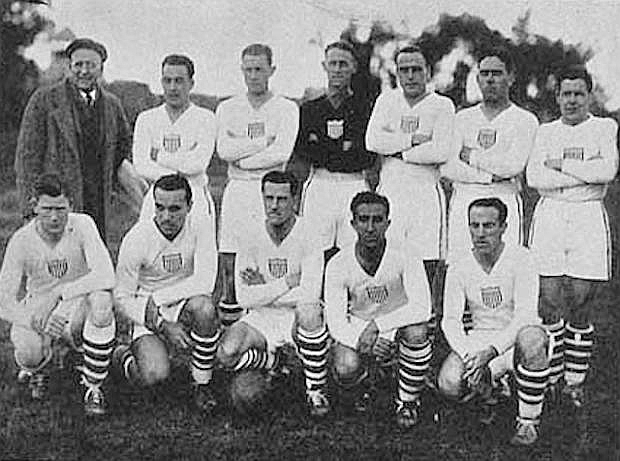 Anyone who has spent time in Scotland, be it for a study abroad programme or a vacation, will have been struck by how much we care about football, and when I say football I mean football, or fitba, but never soccer! Due to the Covid-19 outbreak no professional matches have been played since March, and it looks like there will be no top-flight football in Scotland until at least July, leaving clubs in an uncertain position about the future of the game. Traditionally, when Scottish football fans are met with disappointment, which is fairly often, they tend to console themselves with memories of past glories. In recent years the role played by the Scottish diaspora in promoting football across the globe, from Argentina to Zimbabwe, has been given a great deal of attention. A lesser known story, however, is the connection between Scotland and football in the United States of America.

It is fair to say that establishing football in the United States was met with many challenges, with competition from indigenous sports, the First World War, and the Great Depression hindering the formation of a national professional league. Despite these difficult circumstances, Scots were prominent in early American football clubs. One of Philadelphia’s first clubs, for example, were the Philadelphia Hibernians who fielded several Scottish players during their short history. These included Robert Millar, who would later take America to the 1930 World Cup as a coach, and Bart McGhee, whose father had played for the original Hibernian FC in Edinburgh. Indeed several teams had Scottish connections including Haledon Thistles, Newark Caledonian, and New York Clan MacDonald. Although few of these teams survive today the Kearney Scots of New Jersey, founded in 1895, still play in the fifth tier of the American leagues.

The Scottish influence on the American leagues paid dividends in 1930 when the US were invited to the inaugural FIFA World Cup. As mentioned Scotsman Robert Millar coached the 1930 squad, but there were also five Scottish-born players in the team; Andy Auld, Jim Brown, Jimmy Gallagher, Bart McGhee, and Alexander Wood. Although Scotland had been invited to participate in the tournament, they had recently resigned from FIFA along with the other Home Nations, so refused to attend. Ironically then the first Scots to play at the World Cup did so under the stars and stripes and not the saltire. Despite opposition from European and South American sides with more established footballing pedigrees, the United States came a respectable third out of the thirteen participants. The Scottish presence within the US national team would continue for some time, with no less than forty-seven Scottish-born players representing the US. In fact more Scots have played for the US than any other foreign country by a considerable margin.

Despite the early successes of the national team, football struggled in America during the 1960s. Although the lack of native footballing talent did at least help continue the links between America and Scotland. In 1966, the newly founded United Soccer Association was composed of European and South American sides playing as clubs based in North America as part of their pre-season training. Thus, Dallas Tornado were in reality Dundee United, Washington Whips were Aberdeen FC (President Johnson was allegedly a season ticket holder), while Hibernian adopted the Canadian side Toronto City. Fortunately this frankly bizarre situation was resolved with the foundation of the more successful North American Soccer League. The new set up involved more authentically American clubs, even if they still relied on overseas talent, including Scotland of course. Scotsmen Peter Lorimer, Wille Morgan, Graeme Souness, and several others all played in NASL during its 17 year duration.

Although they are nowhere near as prevalent as they were in the earlier leagues, Scottish players still ply their trade in the new MLS format, with many seeing the US as a desirable place to end their career. Glasgow-born Tom Sermanni also coached the US women’s team from 2013 to 2014, continuing the modern Scottish tradition of at least managing at the top level, if not actually playing there. Regardless of when football returns to Scotland we can at least look back on our history as one of the major disseminators of the beautiful game.