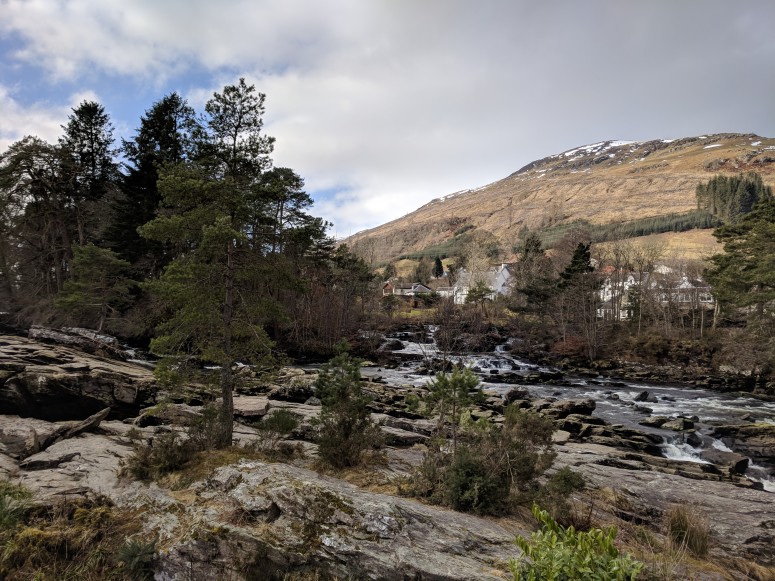 This past weekend saw students come together for a weekend of hiking, biking, dancing and kayaking in the Scottish Highlands. It takes a hardy type of individual to agree to sign up to go to the Highlands at the end of February; Scotland isn’t exactly renowned for its glorious sunshine as I’m sure you are aware. Nevertheless, we set off full of excitement and a fairly encouraging weather forecast.

As the bus left the motorway for winding country roads the sun had set and so the windows only showed a reflection of excited faces, unaware of the scenery outside. After a couple of hours the bus turned onto the tiny approach to Firbush activity centre, with tree branches looming in front of the bus like a puppeteer guiding us along the road and to our home for the next two nights. There was a general murmur of anticipation as we got off the bus. We knew we were next to water but apart from that, it was pitch black and so the scene wouldn’t truly be set until the morning.

After a quick welcome from centre staff there was a light dinner consisting of soup and apple pie – deliberately chosen to make American students feel at home. With limited Wi-Fi and almost no cell phone reception it was a throwback to the good old days of a quiet evening in the lounge playing board games, and a less than quiet game of Pictionary. Soon, people slowly filtered off to bed, ready for their weekend activities to begin.

As I mentioned earlier, the realisation of where we were wouldn’t fully set in until the sun had risen. When I woke up and pulled back my curtains even I, as a seasoned visitor to the Highlands, was taken aback at just how stunning our location was. The loch was right outside my window, and beyond that there were rolling hills and snow-peaked mountains; not another building in sight. I could hear students out in the hallway saying to each other how beautiful it was and couldn’t disagree with them at all. 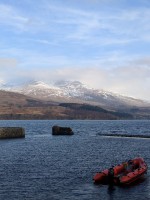 After a suitably filling breakfast it was time to start our day. It was agreed that we would embark upon a hike that would last us a good portion of the day. Despite the frigid temperature the sun was shining and the group were soon kitted out in full hiking gear and a pack-lunch in our bags. Starting by the water we slowly began to climb and it wasn’t long before layers started coming off. As we cleared the tree-line the views offered were breath-taking. The guides had obviously done this route before as they picked all the best view-points for us to get those Instagram worthy shots. The walk continued at a steady pace with the group discussing their differing experiences in Scotland so far and it was nice to be able to get a chance to really get to know the students.

Just as the group were beginning to tire we found a sheltered quarry which meant we could eat our sandwiches without getting frostbite on our fingers. After a quick lunch, and blister check, we were back on our way with the hill peak we were aiming for in sight. Let me tell you something; just because the top is in sight does not mean it is close! We rounded a partially frozen reservoir and all of our cheeks were now resembling a nice shade of Arcadia red. It was time to leave the track to scramble over some heather moors towards our goal. The route was still covered in snow from the winter but as sheep bounded past us we decided if they can do it then we can too. Eventually we made it to the top of the hill and boy was it worth it! You could see for miles and the sun cast a perfect haze to add nature’s perfect filter to our experience. 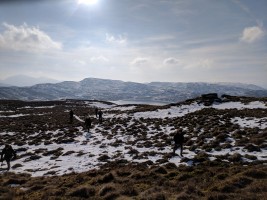 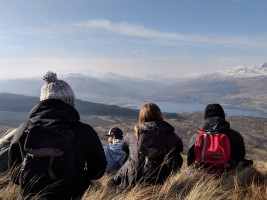 It was cold at the top, very cold, so we didn’t want to hang around and after a couple of group and action photos it was time to start our descent. The route down was a lot more direct than our way up and even included some impromptu tobogganing – don’t worry, it was all risk assessed. Scrambling our way through fields and over streams you could really tell the group was beginning to tire and by now most of us were on auto-pilot, our bodies reacting purely on instinct to put one foot in front of the other to make sure we got back. Eventually we were back by the water’s edge and it was only a short walk back to the centre.

There was some free time to rest and get some energy back before our Burns Supper in the evening. I think most people went for a quick nap, I say “I think” because I certainly did; I’m getting old!

For those of you not familiar with Burns Supper’s, these are a traditional Scottish evening to celebrate the life and poetry of Robert Burns; Scotland’s national poet. We eat Haggis, recite poetry and dance the night away. Our Burns Supper started with the group being lead into the dining hall by a fantastic local piper before Colin, an iconic figure of Firbush, performed an incredible recital of ‘Address to a Haggis’ by Robert Burns. We were then served up a delicious dinner consisting of Haggis, for those of us brave (or crazy) enough to try it, or vegetarian Haggis for those not entirely convinced. After the dinner there was the traditional ‘Toast to the Lassies’ admirably performed by Dom, and the rebuttal, ‘Toast to the Lads’ expertly delivered by Kina in her impressive Scottish Accent!

Once the tables were cleared away it was time for everyone to put on their dancing shoes and start the ceilidh; just what we needed after a 6 hour hike! Amid the understandable confusion as to what foot was meant to go where, when they were meant to spin their partners, or what direction they were supposed to be walking, the group soon became dance masters. 3 hours flew-by in a heartbeat and even though our feet were on fire from the walking and dancing everyone was desperate for one final jig. The ceilidh ended with an almost word perfect rendition of ‘Auld Lang Syne’, another of Burns’s songs. The night was not over yet however. Duncan, the piper, entertained the ever tiring crowd with an array of songs on all different sorts of instruments. As the clock approached 1am this Cinderella was definitely about to turn back into a pumpkin so it was second bedtime. Or so I thought, as my legs were still set to ceilidh dance mode and so I lay awake as my legs continued to run through the Arcadian Strip-the-Willow until finally the welcome embrace of sleep took over.

Sunday morning came around all too quickly yet the group were still as full of energy as if they hadn’t climbed a hill and danced for the whole evening. After breakfast the group got to choose their activities for the day: Mountain Biking, Canoeing or Kayaking. I selected to join the mountain bikers. Having not been on a proper bike for around 15 years, I forgot how painful bike seats were! But, nevertheless, I powered through. Conditions again were glorious but there were icy patches so we agreed to keep it more on the side of classical music rather than a rock and roll mountain bike ride. That being said, there were still some white knuckle moments as we grasped our handle bars for dear life. Our route took us along the bonnie banks of Loch Tay, watching as dogs jumped into the freezing waters and ducks swam past faster than I was able to cycle. 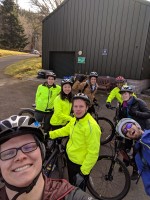 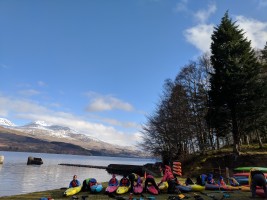 We had a brief stop off at the abandoned Finlarig Castle which once hosted the Scottish Parliament before heading into the local village of Killin and the incredible Falls of Dochart. A quick photo-stop and we were back on our bikes, literally, as we headed back to Firbush. One final uphill section was followed by the most glorious downhill stretch as we were able to free-wheel back to the centre. Delicately, I disembarked my bike and cowboy walked back to the centre for lunch. 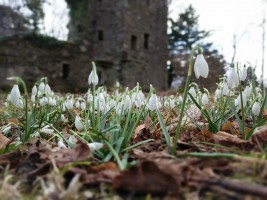 The energy was definitely a little more subdued at lunchtime. The canoers had an almighty battle with the wind as they made their way back up the loch and the kayakers were exhausted from trying their hardest not to capsize. Still, we ploughed on with the afternoon activities. On offer this time was more mountain biking – this time a heavy metal route, a history tour with Colin, the chance to take a road bike for a leisurely cycle into town or the option to stay at the centre and chill. I took the latter option, only because I felt like my legs were going to fall off by this point.

As the separate groups began to trickle back our adventure weekend was almost over. One final light dinner of soup and scones then it was time to get our bags packed on trudge towards the bus. As the bus wound its way out of the centre the chatter died down to a murmur and, almost immediately, a sleepy silence. Having arrived in the dark and not had the chance to see the scenery a brave few fought against the drowsiness and were rewarded with the most stunning sunset over the hills and lochs, providing the perfect scene for the end of what was an absolutely stunning weekend. 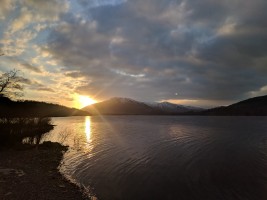