Diving into London: A Student's Story 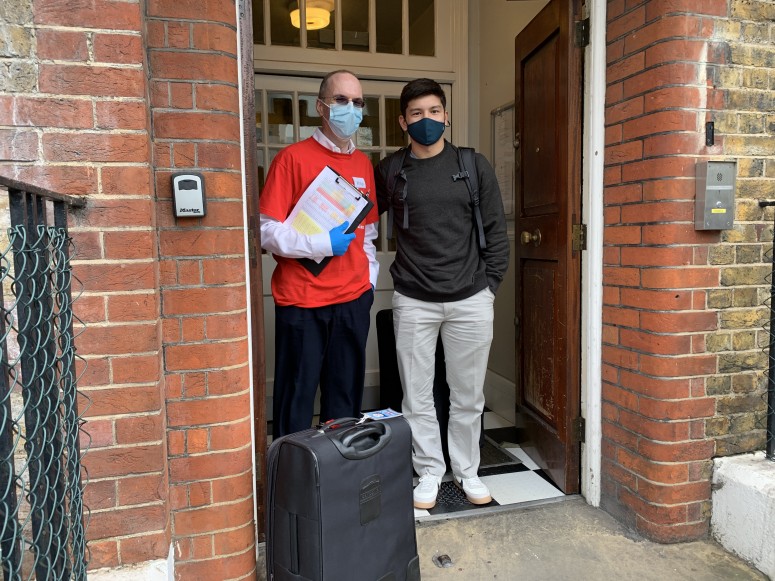 Jack Jee (Hamilton Freshman Semester in London '20) shares his story of how he took one of his passions from home and integrated it into his life in London.

When I touched down in London for my freshman semester abroad, I began to worry about my well-being. Back home in Connecticut, I was accustomed to a rigorous swimming routine that consisted of swimming over 30,000 yards a week, so before arriving in London, I began to worry about how a lack of exercise in the water could affect both my physical and mental health. The fact that I also had to quarantine upon arrival did not help my case, for the long hours of sedentary lockdown began to take a toll on the confidence I once had in my athletic performance.

Following the first week of quarantine, I decided to take action. I began by contacting multiple local swim clubs, but to my dismay, many turned me down due to the stringent covid rules in addition to team capacity measures. However, out of the seven swim clubs I reached out to, one finally replied. The Hackney Aquatic Club, a moderately sized competitive swim team, welcomed me aboard with open arms. Following my acceptance, I rushed to dedicate my time to training with the team for as long as I had before the possibility of another lockdown was set into place.

A head-rush greeted me upon walking into the 2012 Olympic Stadium and I was filled with excitement. It was overwhelming to be meeting my new team paired with the thrill of swimming at the same facility that saw the notorious 100-meter butterfly between American legend Michael Phelps and the great Chad Le Clos. Frankly, it blew my mind. I was finally standing inside the massive, modern, and legendary London Aquatic Center that had seized my attention on television many years ago. I was living the fantasy of my youth. Unlike the standard 25- yard pool that I had known from home, the Aquatic Center’s 50 meter struck me as surreal, for it was as if I could swim in a single direction for miles.

Though I had arrived a few minutes behind schedule- for the city was still introducing itself to me- I quickly swapped my street clothes for a Speedo and dove into the endless water. Yet, as I swam, I began to notice certain cultural nuances that distinguished my perception from those of the British swimmers around me. For instance, the local swimmers would swim on the left side of the lane, and though this adjustment may seem minor in nature to correct, my body’s muscle memory would speak otherwise after crashing into at least two people in the lane- let’s just say I won’t be driving on a road in London anytime soon…

The practices were a great bonding experience between me and the boys- we chatted about school life and about my experience as a swimmer in America. Once we had finished practice, Jude, one of the local club team members, invited me to eat breakfast with him and the other chaps. We walked a couple of blocks to their local spot to grab a ‘proper’ English breakfast. Boy was I in for a surprise, for upon arriving at our table and ordering “whatever he’s having”, the server surprised me with a full English breakfast: fried eggs, bacon, hash browns, chips, baked beans, sausage, and toast all on one plate. After the exhausting and famishing workout that was swim practice, my plate was cleared within 15 minutes.

Due to a second lockdown, jack had to move his interactions with his swim team online until it ended.

It was poor timing, and it’s a shame that it ended so abruptly. I attended a couple of team dry-land zoom calls where they did body weight workouts such as planks, push ups, squats, and other conditioning to stay in shape, but it just wasn’t the same. Yet, despite the disconnect between me and the team, after the end of lockdown I was still able to pick up where me and my teammates left off. We trained well and connected personally. With Jude entering his final year of secondary school, he began to discuss with me the possibility of getting recruited to a university in the United States and his fantasy of pursuing the ‘American Dream’. I ran him through the tedious process of recruiting and helped him find a list of schools that would best fit him. In fact, I am still helping him with the process, specifically emailing coaches and getting his name out there.

Overall, I had a great time experiencing a new culture of a sport that I’ve dedicated half my life to. I’m grateful for the experience that Arcadia has allowed me to have in London. Joining a swim team in a different country is something I never thought I would be able to do, but here I am, writing about how great it was. My entire trip here in London has felt like a long dream, it’s been surreal, and I’m lucky to have had this adventure in my life.